It has been a while since my last blog post. That is mostly because shortly after that post I bought a century home in the Roncesvalles Village to renovate and move Jewel Envy to. Today’s post is not about that process (don’t worry that one is coming in the future) but about a small part of that entire process.

It is about the retail portion of Jewel Envy. Since I was already designing the space I wanted a display system that no one would have. As it took a long time to find the ideal space for the new studio and store I had worked out a lot of the retail in my head before starting to make. By the time I was ready to order parts I knew exactly what was already in existence and what I had to design and find places to manufacture for me. I was able to have all of the parts made in Canada from a variety of places and then assembled them in the studio. I did have some help from fellow studio mate Alexis Kostuk who worked tirelessly to help me get the system installed on time for the grand reopening.

One of the manufacturers that helped the most was a local fabricator called W.M Prager Ltd located less than one block away from my old studio space. W. M. Prager Ltd is a family owned and run business and I was lucky enough that my project interested Mort Prager. He helped me produce a variety of metal fixtures that allowed me to install my displays exactly as I had pictured them. 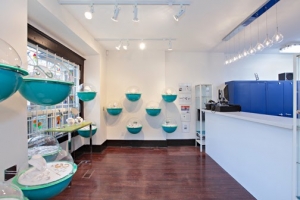 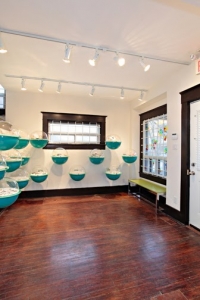 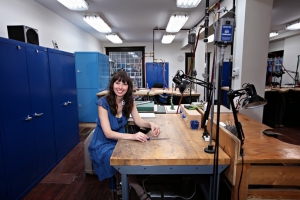 And then after the store was open and the studio was running smoothly, Mort approached me about optioning my retail display. It was quite an exciting conversation. I worked with their design engineers and explained how I had put parts together. Priced the system. We negotiated a fee. They made samples and took them to the Chicago Design Show in the spring of 2013. And then I heard nothing.

I didn’t think about it to much but every once in a while I thought I really should follow up and see what the feedback from the show was. Oddly enough I had some other designs I was thinking of having made so feedback, even it showed disinterest in the design would be helpful. But alas I got busy with my own work and running both the store and studio so I put it on the back-burner.

And then I got a call from Mort. The show had in fact been a success and W.M. Prager had a very large order for the displays I designed. I was getting my first royalty check! I was in a bit of shock and when I went into the store Mort gave me a copy of the catalog. Unfortunately my name was left out of the first print of the catalog but I have been assured it will be included in the next print edition! 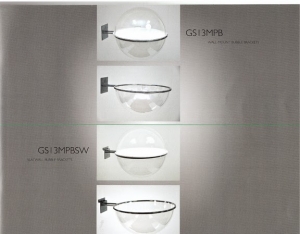 And that is the story of how a trained goldsmith became an industrial designer! More designs to come from PASH in the future so stay tuned to see what I come up with.