Last night was the much anticipated “Boldly” event organized by 18Karat in support of the Assaulted Women’s Helpline.

When I say anticipated it is for various reasons. The event was a year in the making and did not come off without a hitch or two in the planning. There was a change of date, new jurors and a new location but it all came together for a wonderful night supporting an important cause.

During the opening remarks we heard about the statistics of how many women will come in contact with abuse personally or through someone they know. Everyone at the event was hit with the simultaneous notion that we all know someone who has suffered this trauma and needs our support.
As this is a cause I have always supported I was happy to design and create a piece of jewellery for the event. In addition to the fundraising element the event was also a design competition. I was pleasantly surprised last night when I was awarded Best in Show for my necklace “What Lies Beneath”. 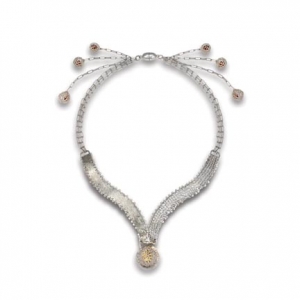 When speaking with the jurors after the awards were presented they said my artist statement moved them and truly explained the piece in a way that was not evident on the surface, which was exactly what I was going for!

Artist Statement
â€œWhat Lies Beneathâ€� is a necklace about strength and courage. The front of the necklace follows the curve of the neck so that it contours into the body while the back has an entirely separate effect. The back defies the conventions of where the focus of jewellery should be, so as to draw attention away from the obvious and cause the viewer to explore. In doing so, it creates an opportunity to reconsider the piece, what it means, and the person wearing it.

This multi-layered necklace has a subtle delicacy resulting from the combining of complimentary techniques. The left side is made from mokume ganÃ©, an ancient Japanese technique made by first layering metals and then removing areas to reveal the layers below. The right side is made from marriage of metal, a flush meeting between metals, with an overlay of knitted wire. The back has knitted pouches holding gemstones. Finally, the central drop in the front combines all of these techniques and elements. These methods were chosen to create both delicate patterns and structural integrity. The concepts of internal strength and courage are mirrored in the necklace through the structure and exploratory nature of the design.

The mokume and knitting have the appearance of fragility, this masks the fact that alone and combined these elements result in a piece with both physical and symbolic strength. While some individuals may not be outwardly muscular, strength manifests itself in many ways. This piece is a metaphor for these hidden strengths.

Courage can take many forms from obvious public demonstrations to actions resulting from subtle decisions known only to the individual making them. The garnets and citrine represent the subtle and often understated nature of courage by being encased and almost hidden. Just as courage is a characteristic often unseen, these gemstones are hidden until a trained eye looks to discover them. The pearls represent public displays of courage. The inclusion of all of these gems represents the range of courageous expressions.